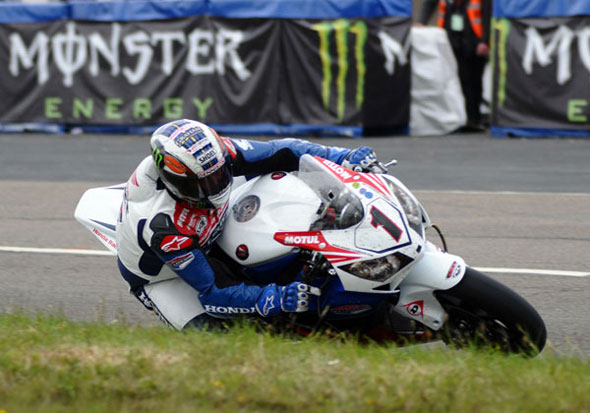 John McGuinness has spoken of his emotions as he headed to an amazing 18th Isle of Man TT win.

McGuinness set a race record in the six-lap contest, easing away from Donald in the second half, aided by the fastest lap of the day – a 130.483mph average speed – to win by 14.86 seconds.

His bid for victory was aided by two perfect pit stops.

“This feels pretty special. I’ve won a few around here in the past and, to be honest, I never know what to say and going off at number one again, it was just me, the track and the stopwatch. There were a lot of leaves on the track first thing and a bit of mist swirling around over the Mountain so I was a bit tentative on the first lap, just feeling my way into the race. After that though, conditions were good and I felt strong everywhere, so I just read my boards once I’d got the lead.”

“Cameron was really on it to begin with it but, after two fantastic pit stops, I had a real good go on laps three and five, hitting all my apexes and concentrating really hard."

"There was a big crowd out there and I got a bit emotional when I went through the Creg on the last lap as it reminded me of how I used to wave at Joey all those years ago! I've had a good start to the season, getting in plenty of races and there's no substitute for track time. I'm not getting any younger but I'm really happy with everything at the moment and am enjoying my racing as much as ever. I've got to say a big thank you to all my team and family - I've got a great group of people behind me and to be sitting here with 18 wins is just incredible."

McGuinness is due to be back in action tomorrow in the first Monster Energy Supersport race and Royal London 360 Superstock TT, both run over four laps, riding Padgetts Honda machinery.